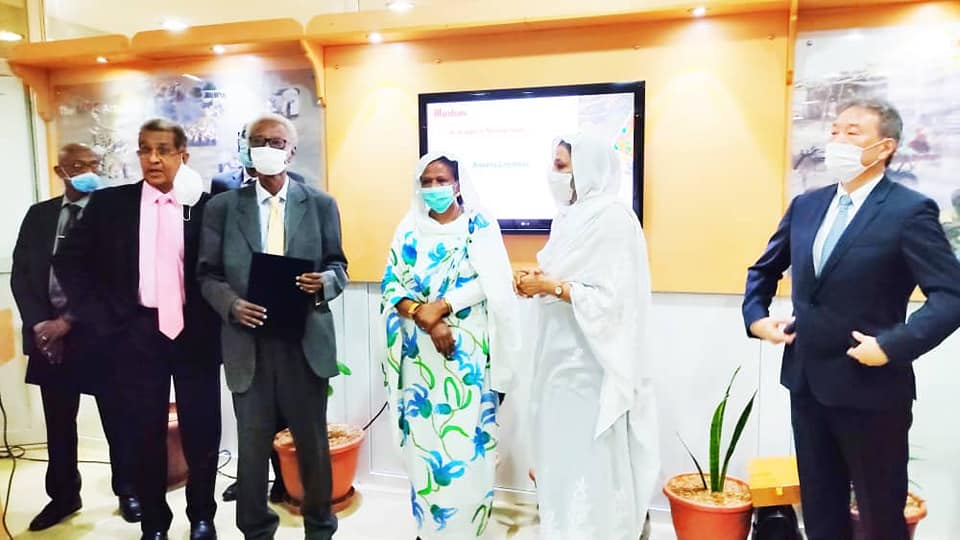 Professor Intisar Saghiroon Al-Zein, Minister of Higher Education and Scientific Research, laid the foundation stone for the Rehabilitation and Training Center for Mycetoma Patients, at the Mycetoma Research Center of the University of Khartoum, in Soba, which is implemented by the Friends of Mycetoma Patients Association and funded by the Japanese Embassy in Khartoum. It also opened, at the same time, the center’s research and development niche.
The opening ceremony and the laying of the foundation stone for the center were attended by Professor Fadwa Abdel Rahman Ali Taha, Director of the University of Khartoum, the Federal Minister of Health, Dr. Osama Ahmed Abdel Rahim, the Japanese Ambassador in Khartoum, Mr. Takashi Hattori, the Director of Soba University Hospital, Dr. Shaddad Mohamed Mahmoud, and a number of members of the diplomatic corps And ambassadors and a group of researchers, academics and interested people.
In her address to the opening ceremony, Professor Fadwa Abdel Rahman Ali Taha, Director of the University of Khartoum, appreciated the efforts of the Director of the Mycetoma Center, and praised the activity of the Center and its employees. She said that the university “encourages scientific research in this new era,” which enhances the role of science and scientists in society.
For his part, Professor Ahmed Hassan Fahal, Director of the Mycetoma Research Center, thanked the sponsors of the center, especially the Japanese Embassy in Khartoum and its ambassador, and the Mycetoma Patients Friends Association. He said that the center will be one of the sides of a large project called (Mycetoma Heritage Village), which will serve as a project for employment and employment for mycetoma patients with the aim of reintegrating them into society in terms of turning them into productive people who do not have a disability that prevents them from working. Everyone is invited to participate in this huge project.
It is noteworthy that the number of mycetoma patients registered in the mycetoma center and who are regularly receiving treatment is 10,000, most of whom are from rural areas. They are the ones targeted by the training center project.
In her speech during the ceremony, the Minister of Higher Education and Scientific Research, Professor Intisar Saghiroon Al-Zein, said that what we are seeing now is an inspiring success story for the Mycetoma Research Center, describing it as the result of efforts, local and international cooperation, and community support. She thanked the Japanese Embassy for its support for the project.
For his part, the Ambassador of the State of Japan in Khartoum, Mr. Takashi Hattori, expressed his happiness at laying the foundation stone for the center, and said that his country supported the project for the rehabilitation and training center for mycetoma patients and will continue to support it until its completion.
In a short speech, the Federal Minister of Health, Dr. Osama Ahmed Abdel Rahim, praised the efforts of the University of Khartoum in linking scientific research with practical reality, and said that Soba University Hospital is one of the most distinguished hospitals, in terms of the treatment services it provides. Praising the support agencies for the rehabilitation center for mycetoma patients.
The head of the Association of Friends of Mycetoma Patients, Mr. Abdel-Razek Othman Abdel-Razek, reflected the work of his association, which “provides support and care for mycetoma patients and alleviates their suffering with the disease that leads to amputation of limbs and impedes movement and affects educational and professional achievement and social coexistence.” And he stated that the association succeeded in introducing more than 1,000 patients under the umbrella of health insurance, in addition to the project to support the installation of artificial limbs for the injured, and other services in cooperation with a number of organizations, associations and individuals.
The event concluded with the presentation of certificates of appreciation to a number of those who contributed their efforts and time to support the center.
* Department of Media and Relations – University of Khartoum *
Sunday 18 October 2020 AD