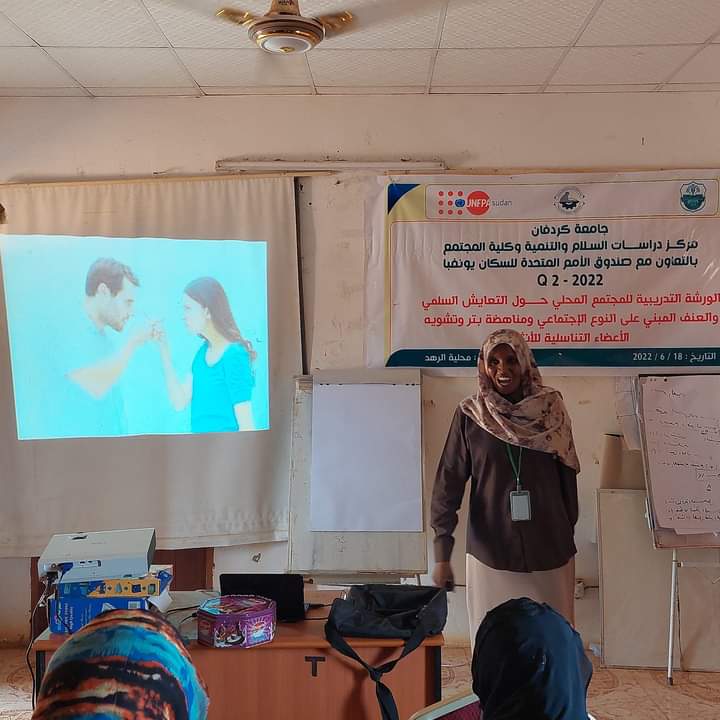 The Center for Peace and Development Studies at the University of Kordofan, in cooperation with the United Nations Population Fund, organized, and within the framework of awareness-raising activities for local community leaders and peace ambassadors, about gender-based violence and support for the abandonment of female genital mutilation or cutting. These sessions, panel discussions, are ambassadors of peace and different age groups of women and men in these neighbourhoods. The participants interacted with the topics raised by the facilitators from the University’s Center for Peace and Development Studies on the concepts of gender-based violence and support for abandoning the practice of female genital mutilation and mutilation and child marriage. The participants in the discussion sessions expressed their satisfaction with the discussion that took place to express their issues, customs and practices. They emphasized the harms resulting from the practice of these customs and announced their abandonment of the practice of female genital mutilation or cutting. While the peace ambassadors stressed the work to raise awareness and continue discussion sessions with community leaders and citizens in the neighborhoods of Bara city. One of the discussion groups in the Western District included the (Social Sessions) group as one of the groups. The group members actively participated in their exit by conveying the information to their families and neighbors and transferring their experience to other groups. Participated in the introduction and facilitation of discussion sessions d. Amal Khalil, Head of Gender and Gender Department, and Dr. Noureddine Salah, Head of Research and Graduate Studies Department, and Dr. Mohamed Ibrahim, Head of Organizations Department. It is worth noting that the discussion sessions for peace ambassadors and citizens in the neighborhoods of Bant, the eastern and western neighborhoods of Bara lasted for three consecutive days.